It's been a memorable week for our Benchmark consultant Becca Morris - she nailed second place at the Neurocare charity Bake Off, plus the icing on the cake has been hitting her ambitions target for 2015 two months early!

Becca cooked up a treat for Neurocare's annual Bake Off going up against the city's star bakers, showcasing her own signature bake of a four layer wedding cake. After weeks of preparation, Becca was delighted to take second place impressing the Great British Bake Off's Howard Middleton as a star judge, and to top it all, the proceeds taken for cake at the event went towards Neurocare supporting Sheffield Hospital's Neuro wards. 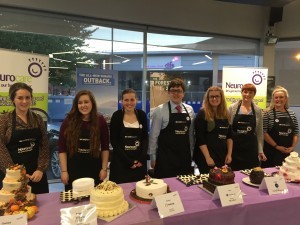 Becca heads up the Commercial and Legal desk at Benchmark, and clearly has the recipe for success with it even filtering down to her professional career - we're not even in November and she has hit her 2015 ambition target, seeing over 50 people paired to their dream roles in South Yorkshire. Success in recruitment doesn't get much better than this So, we're quite literally taking our hats off (chef hats obviously) to our star recruiter.