Benchmark Team Leader Rebecca Morris is smashing up the Benchmark record books by winning consultant of the month three times already in 2017. She certainly knows how to 'lead by example' as she also recently went on an all expenses paid trip courtesy of Benchmark to Vienna to mark her winning Consultant of the year in 2016 - the third time she has won this accolade.

Rebecca's hard work paid off last year as her constant high performance meant that month-on-month she accrued points for placing candidates in their perfect roles and for client satisfaction Vienna was the perfect reward where Rebecca and her partner, Chris spent a weekend soaking up the culture, and beer! 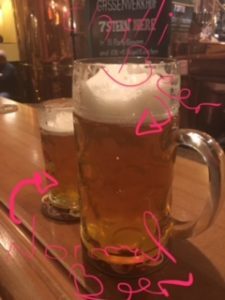 "Rebecca's success is a testament to her hard work and the lasting relationships she builds with everyone she comes in to contact with. In her third year at Benchmark she has built up a strong client base and a good pipeline of referrals from people she has placed in roles - people who are so happy with the service they have recieved they have referred friends on to Rebecca! I couldn't ask for a better Team Manager to lead and develop the Benchmark team." said Louisa Harrison-Walker, Managing Director at Benchmark